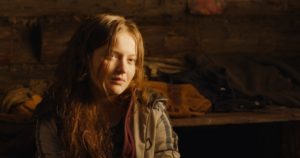 Premiere in Russia: September 2018
Nominated for the Kinotavr Debut prize in 2018

The only way left for the young couple to remain in the union is to put themselves in peril. On the one side there are hundreds of miles of unforgiving Siberian forests and on the other is Nadya’s oppressive father chasing them.

Director of the film Coupled

Director, screenwriter. Born in Novokuznetsk in 1981. In 2012 graduated from the Saint Petersburg State University of Film and Television, majoring in direction of fiction films (class of S. Ovcharov). His film F5 won the Kinotavr Shorts Competition in 2013. His short films also received top awards at festivals such as Saint Anna, Message to Man, PiterKiT, Kinoproba, Artkino, Sehnsüchte (Germany), etc.