The myth about creating human life turned out to be cinematic. The first film adaptation of Mary Shelley’s novel “Frankenstein” was created back at the Edison’s studio, a large population of mannequins and puppets that came to life inhabits the early films of “Pathé” and “Gaumont.”

For soviet avant garde of 1920s the idea of creating a new human turned out to be productive, in accordance with atheistic world-rebuilding oriented mentality. Interest in the topic of rebuilding human is not accidental, it’s probably connected with the demonstration of robots at the London Radio Exhibition, which made such an impression on the public that the idea that came to film from science fiction novels came to be perceived as up-to-date, topical, and relevant to scientific progress at the time. that is how the idea was viewed by dramatist Georgi Grebner, screenwriter for the film “Loss of Sensation” (1935), which will be shown at the end of the workshop along with fragments from different films that illustrate the workshop. 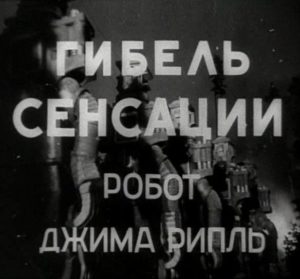