NON-FICTION FILMS AS “HUNT FOR REALITY” 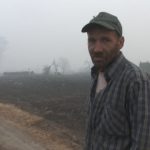 Summer of 2010. Russia. Forest fires. Lesha’s village has burnt down almost completely, only some burnt trees and piles of bricks instead of houses left. New houses have been built for the survivors in another village 20 kilometers away. But Lesha doesn’t want to leave. We are walking with him through the burnt down village to feed a cat and a dog living at his house ruins. 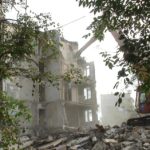 Old panel houses are being demolished. New modern excavator crumples concrete blocks like cardboard. It looks a bit like a dragon with a long neck. It’s almost finished with a house next to Sasha and Lena’s and will inevitably get to their house in a couple of days. But they have nowhere to move, Sasha’s relatives have dispossessed him of his apartment through some legal schemes, and Lena is from Moldavia and has no legal place of living. For three months now they have been living without water, electricity, and sewage. Sasha’s sister has agreed to find him a room on the condition that he leaves Lena behind. But he isn’t taking this deal. And the ‘iron dragon’ keeps coming…