Director, writer, producer. Born in Sol-Iletsk. Graduated from Economical engineering department of Ural State Technical University in 1988 and from Screenwriting department of VGIK (Gerasimov Institute of Cinematography) in 2000. From 1995 to 2005 he worked at Sverdlovsk Film Studio as economist, deputy director, producer and film director. Since 2005 he is a producer and a director of “29th February” Film Studio. He is the creator of “First on the Moon” (2005, Venice Horizons Documentary Award, Grand Prix of the International Film Festival in Lublin, Grand Prix of “Kinoblik” in Stuttgart, and other awards); “Ovsyanki” (2010, FIPRESCI Prize at Venice Film Festival, Grand Prix of the International Film Festival in Abu-Dhabi, and other awards); “Celestial Wives of the Meadow Mari” (2012, Grand Prix of the “New Horizons” International Festival in Wroclaw, and other awards). In 2015 his new film “Angels of the Revolution” was premiered (“Marcus Aurelius of the Future” prize at the Rome Film Festival, Kinotavr 2015 prize for “the best director,” and the prize of the “Slon” Guild of Film Critics) and will be shown at the “Kinoproba” festival.

Member of the European Film Academy. 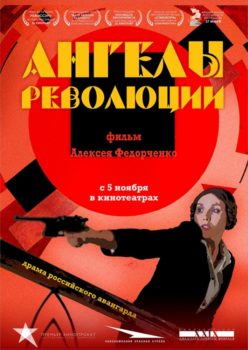 «“Angels of the Revolution” is the most whole, consistent, mature and harmonised of Fedorchenko’s films. If by some unfortunate accident you are still not acquainted with his unique films, you should start with this one. Sometimes terrifying but still exciting peculiar variety of the world, even of the so-called Russian world, confined to the geographical borders of Russia, does not prevent authors from structuring it in meaningful, compelling story, the characters of which, commissioners in dusty helmets, are determined to rebuild the universum and to ensure the victory of the worldwide revolution. Their ambition is conquering the sky, and the director is seemingly revoicing their ambition, allowing the commander of their squad Polina Shnaider (probably the best role of Daria Ekamasova) at the beginning of her “career,” still as a girl, to shoot angels on her birthday cake with a revolver and then attach the wings to pet dogs in order to film the first advertisement of Soviet airship construction. That is why people aspire to get higher – to cancel the higher hierarchy once and for all. Revolutioners just don’t know that after exposing the angels they will have to take their place.» – Anton Dolin, film critic of “Afisha” magazine.