Главная|Мастер-классы|Screening with the director Dmitriy Geller

Fishes, swimmers, boats
Transform the water
The water is soft and moves
Only for what touches it.

Dmitry Geller is an animator and artist. In 1990 he began working as a drawing artist at A-Film Studio. In 1997, he graduated from the Higher Courses of Scriptwriters and Directors (workshop of F. Khitruk, Y. Norstein, E. Nazarov, A. Khrzhanovsky). In the same year he shot a one-minute film for an almanac dedicated to the 850th anniversary of Moscow. He made animated inserts and sketches for feature films and documentaries. Book illustrator. 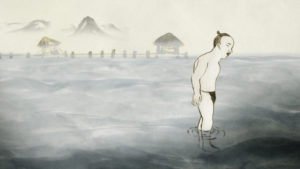 Retrospectives of his films were held in Moscow, Amsterdam at the Ship of Fools, at film festivals in Saint Petersburg, Ekaterinburg, Poznan, Nikoz, Sofia; selected films were shown in the New York Cinematheque, the Victoria and Albert Museum in London, and some of his films are in the collection of the Hiroshima Festival Museum.