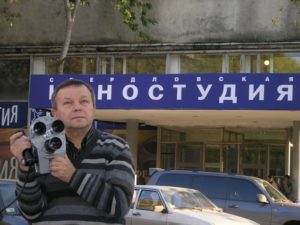 Director, camera operator. He graduated from the Sverdlovsk Mining and Metallurgy College (1955). Since 1958, he has been working at the Sverdlovsk Film Studio (Yekaterinburg). Director-operator of non-fiction films Shining Path, Melomaniac, Techa, Armageddon, The Egyptian and others. Received numerous prizes at Russian and international film festivals.

Member of the Russian Academy of Motion Picture Sciences NIKA.

Once, on the question of what kind of person he really is not interested in, the director replied that he did not take before and not taking interest now in narcissistic, self-righteous persons. And indeed, in Tarik’s films we will encounter fanatic artists (Egyptian), communist fanatics (Man of the House, or Kevin Kane in the Bolshevist Country), fans of the commercial affairs in the area of singing (He, Who is with the Song), home-grown sex addict philosophers (It’s not as Easy), people who resemble cranks from Shukshin’s novels, but we won’t find a single narcissistic personality. The film Two Cities, One Love is about the unselfishness of creativity. It is made without any studio and state support, the name was suggested by a collection of poems by Rina Levenzon, presented to the director by the artist Vitaly Volovich.