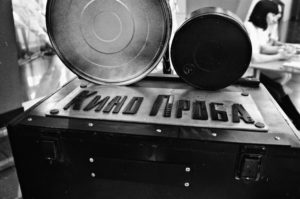 The festival “Kinoproba” has place in Yekaterinburg since 2004. Moscow is not a random place for the festival of young filmmakers, so here in Yekaterinburg was the famous school of the Ural animation and documentary films. Ural animation is one of the most famous in Russia and the world. There were such directors as Aleksandre Petrov (winner of the “Oscar” for the film “The Old Man and the Sea”), Alexey Haritidi (Golden Palm at Cannes for his film “Gagarin”), etc. The city has a unique children’s animation school “Attraction”  headed  by Sergey Aynutdinov. In fiction films Alexey Fedorchenko and  Vasiliy Sigarev made ​​their awards at national and international festivals of class “A”.

During the first three years of competition in the festival “Kinoproba” consisted only of animated films. Since 2007, the festival is expanding its borders and the program also includes a short fiction films, and since 2008 – a documentary. Since 2010, in the “Kinoproba” appeared contests for non-professionals (for example competition “Mobile Cinema” with MTS workshop on documentary film in conjunction with the U.S. Consulate General in Yekaterinburg, the laboratory “Hunt for the reality: the epic poetry, drama created by initiative of Fund of Boris Yeltsin in 2012).

The success of the festival supported by the introduction of “Kinoproba” in reference Russian film festivals. The festival  opened such new names in the world of animation, as Elizabeth Skvortsova, author of the collection of cartoon “Lullabies of the World” (Moscow), Zoe Kireyeva, winner of numerous international awards for her debut “Fool girl” (Yekaterinburg), etc. The audience have the unique opportunity to discover films of young filmmakers, film of students whose work is not duplicated yet.

An important component of the festival is working with young viewers. In last festivals children and their parents have met with Leonid Nosyrev, the author of the cartoon “Antoshka”, Denis Chernov – TV series “Smeshariki”, Andrei Khrzhanovsky –  author of “The Ballad of the King’s sandwich” , Lisa Skvortsova –  the author of a cycle of cartoon “Lullabies of the world.”

Annually among guests and jury members of “Kinoproba” are world-renowned filmmakers. So in 2012 the festival jury headed by film director Andrei Zvyagintsev, in 2011 to the festival came John Rapse -director of the Academy of Screen Arts at Edith Cowan University, Perth, Western Australia, the nominee of the youth ‘Oscar’, Member of the Advisory Board of the Oscar in the category “Best foreign language film “Greg Helvi, in 2010 a guest of the festival was the creator of the studio Aardman Animations David Sproxton.

In 2009 documentary from the United States conducted a workshop to those who wish to make a film, for 4 days was shot and edited 4 films about Yekaterinburg. In 2010 in the festival was performed a competition of mobile cinema. The winning films were shown at the closing ceremony of the festival.